LED fixtures have extremely long lifetimes, that’s the great benefit of using them. How does a manufacturer accurately represent such a long lifetime?

The first thing to understand is that when we say LED lifetime we really mean the useful life. The useful life of an LED fixture is most often defined as the period of operating hours until the lumen output has depreciated to 70% of it’s initial output.
This is the L70 rating, the most commonly accepted estimation of a light’s useful life.

With so many choices in LED lighting, the accuracy of the L70 rating has become an increasingly important factor for the end user. To ensure it’s reliability, the lighting industry has been making continual improvements in testing methods and procedures.

When L70 was first implemented, manufacturers were at liberty to derive numbers based on their own test methods. Without a common test, the L70 ratings were too varied to be meaningful. In response, the Illuminating Engineering Society (IES) developed a testing procedure called LM-80. LM -80 dictates that LED manufacturers test for lumen depreciation at three different temperatures 55°C, 85°C and 105°C for at least 6000 hours.

Now there was a uniform method of testing. The next challenge was to extrapolate the data from LM-80 to find an accurate useful life period without having to test for 50,000, 100,000 hours or more. After many years of analysis the IES developed TM-21, a series of complex algorithms to be directly applied to LM-80 data. TM-21 allows the manufacturers to accurately estimate useful life hours at real world operating temperatures.

L70 ratings can be either calculated or reported. Reported values are limited to 6 times the value of the LM-80 data. Calculated values actually yield much higher useful life hours. 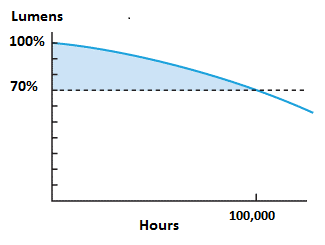